K-pop fans dressed in their favorite merch from their favorite groups that featured individual K-pop stars such as SUGA from the group BTS. (Alberto Silva Fernandez)

A night of K-Pop in the Zoo: the first K-Pop event in collaboration with the El Paso Zoo

In between the Elephants and Malayan Tiger exhibit on the night of Sept. 10, the El Paso Zoo in collaboration with the Instagram pages @Girlswihtluv and @epkpop_events, held a K-pop celebration with music, food, gifts, dancing and animals.

The pages @Girlswithluv and @epkpopevents are self-designated “official fanbase” pages for fans of Korean pop music groups like BTS from the El Paso region.

Doors opened an hour before the event for those with pre-sale tickets to enter.

According to zoo officials, the pre-sale for tickets for the event sold 600 tickets.

At 6 p.m., a line to buy tickets had begun to form down the sidewalk hugging the perimeter of the zoo entrance as the parking lot began to fill.

“In the Zoop: K-Pop Night at the Zoo” was the official title for the event and is the first collaboration between the City of El Paso and local K-Pop fans.

The night kicked off with a jam-packed wildlife amphitheater where local K-Pop fans took photos at a photobooth, did some trivia, watched a recently made, local dance cover group called Allures who performed dance covers to various K-Pop artists like NewJeans, and eventually, with light sticks in hand, had a K-Pop rave late into the night. 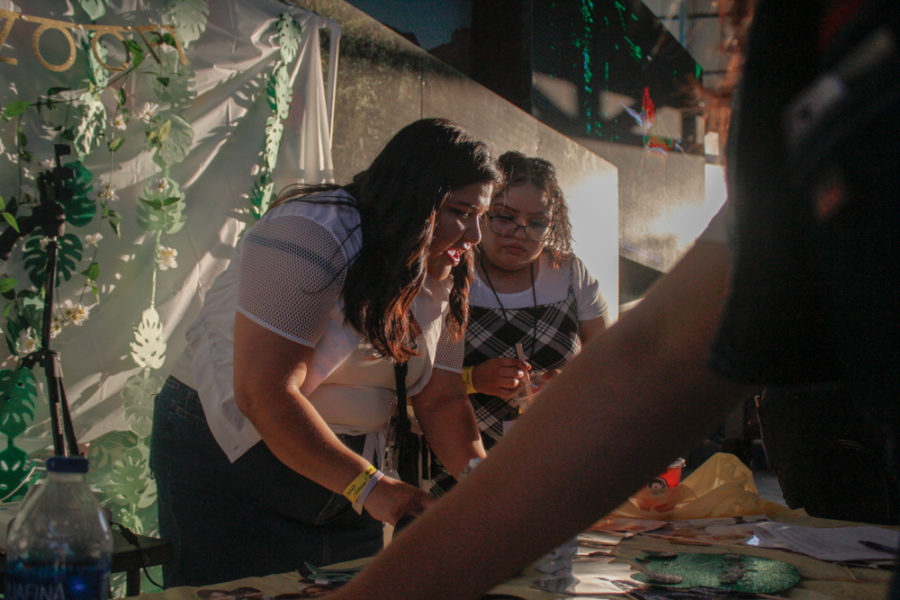 Zoo officials said the event was a “massive success” and according to an email sent from Sarah Borrego, a senior marketing specialist for the El Paso Zoo,more than 1,800 tickets were sold and all the vendors attending sold out of items.

Other events that happened around the zoo that night included a performance by the PIE sisters who sang covers of K-Pop songs and a fire dance show by Odd Lab, a local performance group.

Before the night at the zoo

It was at one of the very first @Girlswithluv– hosted events in May that Jenelle Paz and Alexandra (Alex) Padilla spoke with Borrego and discussed her idea of a K-Pop –themed event at the zoo.

“After that first event I told Alex we’re gonna need help,” said Paz. “We need more people to plan these events because with the two of us and my mom, it was like, overwhelming.”

So the pair brought on their third administrator, Viktoria Avediciam, a BTS fan, a mother and a friend of Paz’s.

Together, the three of them prepared more than 200 handmade items to giveaway to those who attended.

“I’m expecting it to be really good. I’m hoping we get a lot of people engaging and like speaking up, that’s what I’m trying to get a lot of interaction from people,” Paz said in an interview the day before the event.

Paz, Padilla, and Avediciam had all been K-Pop fans privately prior to making and running the @Girlswithluv account.

“My mom and I were talking, and we had seen one of my friends in Florida and he had (gone to) a huge event,” said Paz. “And I told my mom like, why don’t we have anything like that here? Are there no K-pop fans in El Paso or what?”

So, she shared her thoughts with TikTok in the hope that she could share her love for music and find others in El Paso who felt the same way.

It was Padilla who initiated the creation of the page by reaching out to Paz after she viewed a video from Paz on TikTok about how she wished there were more events in El Paso for K-Pop fans to attend.

“I had just started being a K-pop stan during COVID. So I didn’t know what it was to have social K-pop friends,” said Padilla. “(When I saw Janelle Paz) I was like, ‘Oh my God, I want to be her friend so bad.’ And Janelle had said she’d been wanting to make events, so I was like, let’s do it.’”

The first event they created together was a cup-sleeve giveaway for fans at a local shoe and boba store.

Paz, the lead creator of @Girlswithluv invited Avediciam after re–uniting with her at their first event.

“I’ve known Vicki (Avediciam) for like 10 years. We played against each other in basketball,” said Paz. “At first I didn’t recognize her because she had – well, has – purple hair.”

Avediciam has been a fan since 2015, just two years before BTS performed on the American Music Awards stage for the first time.

“I started looking into more of BTS (and) the meaning of their songs. It drew me closer to them,” said Avediciam. “They’re close to me, it’s something I hold to my heart.”

Since then, Avediciam has gotten multiple K-Pop inspired tattoos and is now the latest member of the group.

Avediciam has been an admin since then.

Now, after having three successful events, the group hopes to continue to gather and connect with other K-Pop fans across El Paso.

Officials for the El Paso Zoo say that they plan on a second “In the Zoop” event next year and are open to collaborating with more fanbases on other themed events in the future.