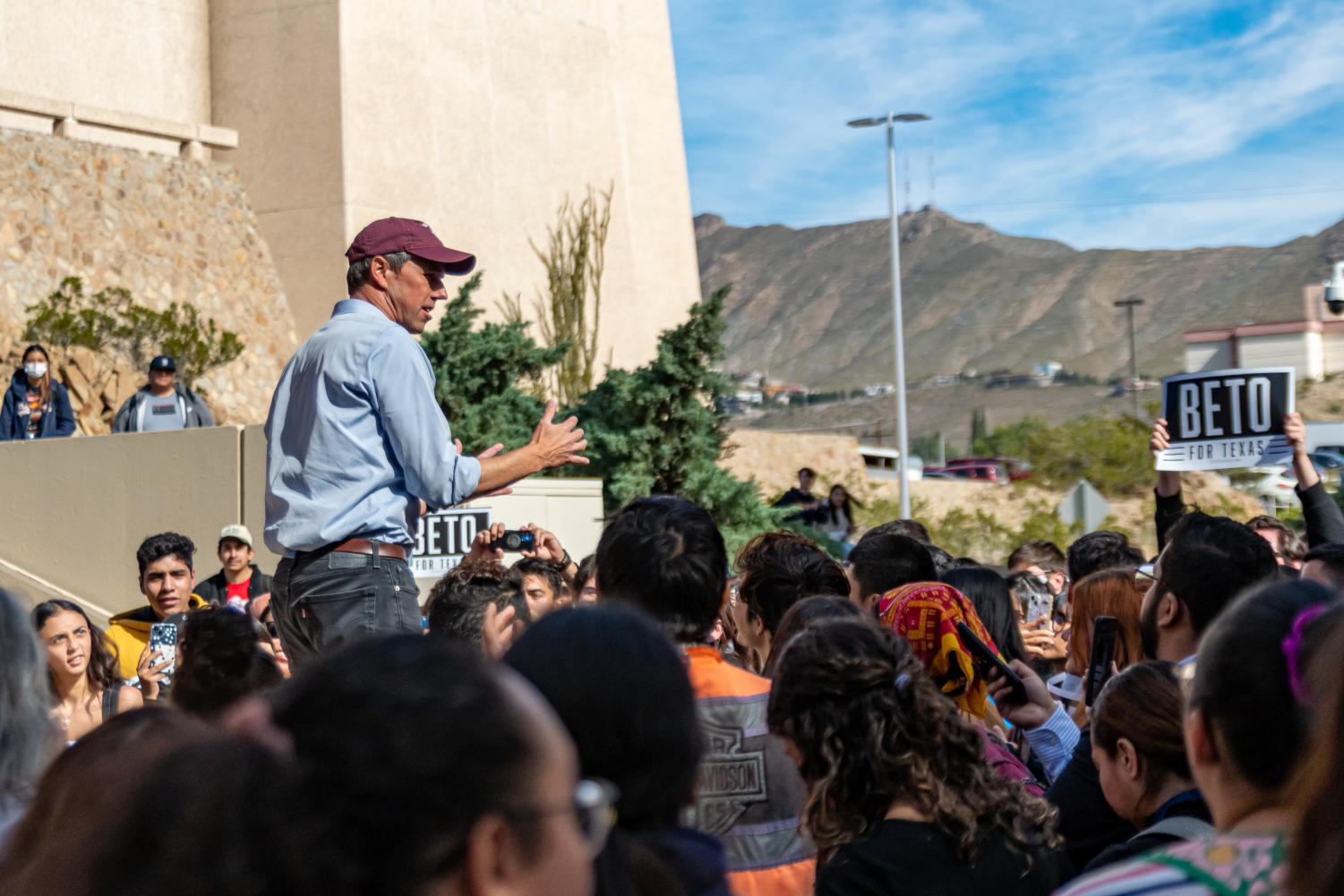 Incumbent Texas Governor Greg Abbott and gubernatorial candidate, and El Paso-native, Beto O’Rourke made stops in the Sun City to encourage voters to vote before Election Day. Energizing younger voters can be what plays one of the biggest roles during the 2022 midterm elections, and the candidates took two distinctly different approaches to their visits.

On Oct. 1, Abbott held a campaign rally outside the Riviera Cocina and Cantina in El Paso’s Upper Valley. Supporters gathered in the dwindling sunlight of the late afternoon to hear the governor speak.

Abbott continued to draw contrast to the challengers’ opposition in regard to the economy of Texas which he called strong. Another issue for the governor, whose stance drew applause from supporters was immigration and drug trafficking.

Echoing the efforts from former President Donald Trump, Abbott doubled down, pushing for the completion of the border wall between the United States and Mexico. Going further by touting the reclassification of cartels as terrorist organizations.

Attendee Gabriel Avila cites the governor’s opposition to vaccine mandates and the closing of businesses during the pandemic as reasons for their support. As well as his support of the Second Amendment, protection of families and closing the border.

“Everybody is saying that El Paso is like a blue cities but there’s still a lot of Republicans and conservatives, and that’s important,” Avila said. “I’m actually conservative. But unfortunately there’s no conservative democrats anymore.”

Continuing that the real problem Avila has with the democratic party is that he felt as though it has gone too far to the left.

Elizabeth Eckles, 17, attending the governor’s ‘Get Out the Vote’ rally with her mother, expresses the importance of being informed in elections, especially young voters.

O’Rourke, in an effort to solicit younger voters, held a rally at the University of Texas at El Paso Nov. 3, five days before Election Day with two days left in early voting.

Preceded by Congresswoman, and another El Paso-native, Veronic Escobar, O’Rourke stepped out to speak and vote with hundreds of students.

Similarly to the incumbent governor, O’Rourke made little change to the verbiage that has resonated with his base. Both rallies called for attendees to reach out through text and encourage friends and families to vote.

O’Rourke spoke about gun violence in the state, in which he says Texas is leading the nation, and furthering his stance with the citizens and families of Uvalde, Texas which saw a devastating mass shooting at Robb Elementary School in May of this year.

The gubernatorial candidate also echoed Escobar, who spoke about bodily autonomy, which has been a massive democratic talking point after the U.S. Supreme Court’s overturning of Roe v. Wade.

Texas passed Senate Bill 8, a trigger law that went into effect in August of this year, after the U.S. Supreme Court’s 2022 decision Dobbs v. Jackson. The law not only bans abortions, but allows private citizens to turn in those who had received or performed an abortion for a payment of $10,000, spurring uproar from progressives.

Finally, in contrast to the governor, O’Rourke pushed the importance of young voters. Inviting all those in attendance to vote along with the candidate after his speech, followed by students lining up for a picture with O’Rourke, who cheered and rang bells when students revealed they were first-time voters.

Within the last decades, voter turnout for El Paso County has been low. The presidential election of 2020 yielded a 52% turnout for the Sun City, but the last midterm election in the county failed to reach even 50%.

The last time the county saw a turnout of that magnitude was in 1992, with a total of about 64%, the presidential election that saw Democratic Governor of Arkansas, Bill Clinton, defeat Republican incumbent George H. W. Bush.

Young voters, particularly college-age voters, seem to be the guiding force behind both Governor Abbott and Challenger O’Rourke’s rallying cries.

“It was someone that I supported his ideals,” said Edgar Loya, an 18-year-old sophomore and first-time voter, after attending O’Rourke’s rally. “Honestly, to keep my voting I think it has nothing to do with them, more on my end. Just keeping myself more informed on what’s going on here in Texas.”

What seems to have drawn more engagement from UTEP students was O’Rourke’s Hispanic background. The student body at UTEP being about 84% Hispanic, according to the university’s website.

“With more diversity, you get different opinions,” Loya said. “It’s a lot easier to solve issues that might come across.”

Stephanie Pulido, Jairo Hernandez and Alyssa Orozco, 18-year-old student-attendees, pressed the importance of exercising the right to vote by “making a difference,” as Pulido said.

“Fully engage yourself,” Orozco said. “ I feel like being involved as much as possible, It’s very important, I just kinda wanted to hear like everybody talk.”

Hernandez also spoke on the importance of having a Latino candidate.

“I feel like they know more about the issues in the Latino community,” Hernandez said.

El Paso’s turnout for the 2022 midterm election falls behind in comparison to that of the 2018 midterms, 53,000 and 89,000 respectively, according to nonprofit new organization El Paso Matters. But with more engagement in younger voters, the Sun City could see those numbers rise.