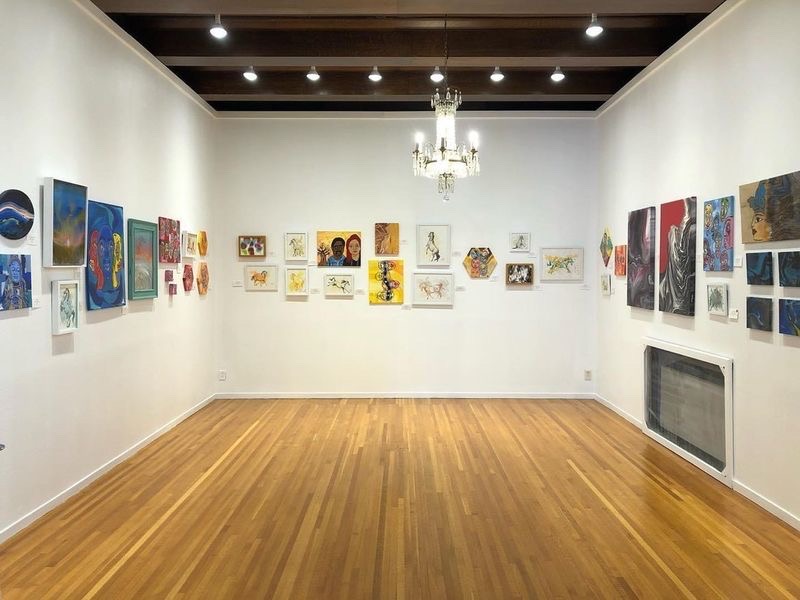 The art exhibition that brought UTEP and local artistry together

Honoring the space dedicated to the art, "The Dawn of a New Day" brought a fresh style to an El Paso gallery that deviated from the 20th century art style typically showcased

As a way of sharing the uniqueness of the borderland area, many talented artists have been on the lookout to exhibit their art in local museums and beyond. Some found a home in a Victorian-style mansion  in El Paso’s Rio Grande district in early March.

On Montana Ave and less than 2 miles away from the heart of Downtown, the International Museum of Art which formerly belonged to the Texas State Sen. William Turner and his wife, Iva, stands as the safe of artworks ranging in a wide variety of styles. The museum officially opened in 1947 and is the home to more than 450 paintings and 25 sculptures.

With a vast collection of oil-on-canvas paintings, pencil and ink drawings, bronze sculptures, and artifact collections, the museum is home to more than two centuries of history from the El Paso-Juarez region, as well as the Turney family’s personal history. Visitors can travel through time while looking at old furniture that belonged to the Turney family, at masks used during African fertility rituals, and Mexican Revolution artifacts and art.

Even though the museum showcases mostly art from the 20th century, it is open to accepting new art in its changing galleries.

Putting their first exhibition together, a current University of Texas at El Paso student (UTEP) and a 2019 UTEP alumna, joined forces along with another local artist to showcase their art in the city of El Paso’s International Museum of Art.

Three different generations of artists and three different perspectives with the common theme: El Paso sunset. In an exhibition titled:“The Dawn of a New Day,” each artist hoped to detail their different journeys through art and bring a different interpretation to life by utilizing a color palette inspired by the El Paso sky.

Current UTEP student Gia Flores, 21, described her art as a reflection of a new chapter in her life.

“My inspiration for the exhibition was to expand and change my artwork, as well as give it a new interpretation,” she said.

Flores began her journey as an artist during her senior year of high school, where she created her brand and signature style as an artist: abstract versions of faces, mixing colors and textures.

“I use the personalities of the people I have crossed paths with as inspiration for my paintings,” Flores said. “Each face reveals a wide range of personalities as well as who or how the individual is.”

Today, Flores is an intern at WHERE and hopes to complete her bachelor’s degree in painting, along with a museum studies minor. She also plans on pursuing graduate school and eventually becoming a museum curator.  Besides her future aspirations, Flores considers herself an entrepreneur and sells her original work in more forms than just art pieces; you can find her art and brand “ABISMO” stapled onto jewelry, T-shirts and mugs.

UTEP alumna Pamela Vigo-Sanchez’s theme surrounded the motif of the horse. He She said she was inspired by the Renaissance period and pieces from the museums of the Louvre and Versailles.

“Inspired by a trip to France, I created a series of drawings based on the dramatic depictions of horses in the monumental battle-scene paintings,” Vigo-Sanchez said.

She said she asked horse owners if she could use their horses as models to reference for her drawings.

Vigo-Sanchez, 28, not only takes her inspiration from the fancy museums of France, but something closer to home, her horse Indy. Her business is fully based on Instagram, where Vigo-Sanchez shares with her followers her journey with her loyal companion and sells portraits of her biggest inspiration.

“I have plans to submit and be selected to showcase my work in equestrian-specific events and venues, including abroad in Europe,” said Vigo-Sanchez, mentioning how this collection inspired her to create her next pieces focusing solely on horses.

“Dawn of a New Day helped me create a complete collection of works and will be based off extensive research of the horse in culture,” said Vigo-Sanchez.

The third artist that took part in the exhibition was local artist Joanna Overton, 43.

“I chose to capture how the rays of new day cast their light over the city,” Overton said.

Overturn’s main piece for this exhibit did this by using the techniques of overpour art and resin.

“I usually go back and forth, between both techniques, but resin gave the piece the hazy, abstract, giving the audience a visual of a new day,” Overturn said.

Together, the artist, “wanted to open up a new youth and student gallery to the International Museum of Art,” Overturn said.

“One of my dreams was to have my artwork displayed in a museum, and that desire was fulfilled here at the International Museum of Art,” Flores said.

Now Flores’ career goals have shifted. She said she hopes to own a museum and support artists flourish and gain the opportunities she has received as an intern.

Overturn’s journey as an artist has inspired her to expose distinct artistic techniques to her followers, “since pour art isn’t a common form of art seen here in the Borderland, I hope to encourage other fellows El Pasoans to express themselves through this technique,” she said.

She teaches classes on Instagram LIVE every Sunday, answering any questions her audience has regarding each technique.

But Overturn hopes to build a bigger and broader audience.

“I would like to get to know more local artists and get more opportunities to have my art exposed in more museums and local shops,” said Overturn.

She also plans to build a community outside of El Paso by building her own YouTube channel dedicated to the technique of pour art.

According to the museum’s website: “’Dawn of a New Day’ is curated to bring in a new light to the International Museum of Art and shepherd in the new youth art program set to allow young artists to be given an opportunity to display their art in a museum setting.”

“In total it took a little over a month and a half to prepare, from the artwork, marketing designs, scheduling and booking musicians for the entertainment for the reception,” Vigo-Sanchez said.

The end result was a successful show.

Having everything calculated, each artist got the chance to display their passion and hard work on the walls of the International Museum of Art and hope to have further exposure in the future.

The closing ceremony took place March 26. Not only did it showcase the visual art of Gia, Pamela and Joanna, it also gave musicians a space to share their music and be acknowledged within the community. Honoring Turney’s wishes of having the space to “always be used for the arts,” according to the museum’s website, “The Dawn of a New Day” brought a new sense of art to the galleries, as it deviated from the 20th century art style.

The exhibit not only allowed the museum to remain updated in the art movements and styles but gave Gia, Pamela and Joanna the opportunity to share their work in renowned local museums. This gives them the experience of what it means to be exhibited in a museum, which will allow the artists to continue their journey of sharing the borderland lifestyle through their art.

As of press time, the exhibit has been removed from the galleries, but students are welcome to visit the museum as it exhibits local art throughout the year in their two changing galleries.

For more information on “The Dawn of a New Day” exhibit and the International Museum of Art visit https://internationalmuseumofart.org/?event=dawn-of-a-new-day-group-exhibition-turney-youth-gallery-2