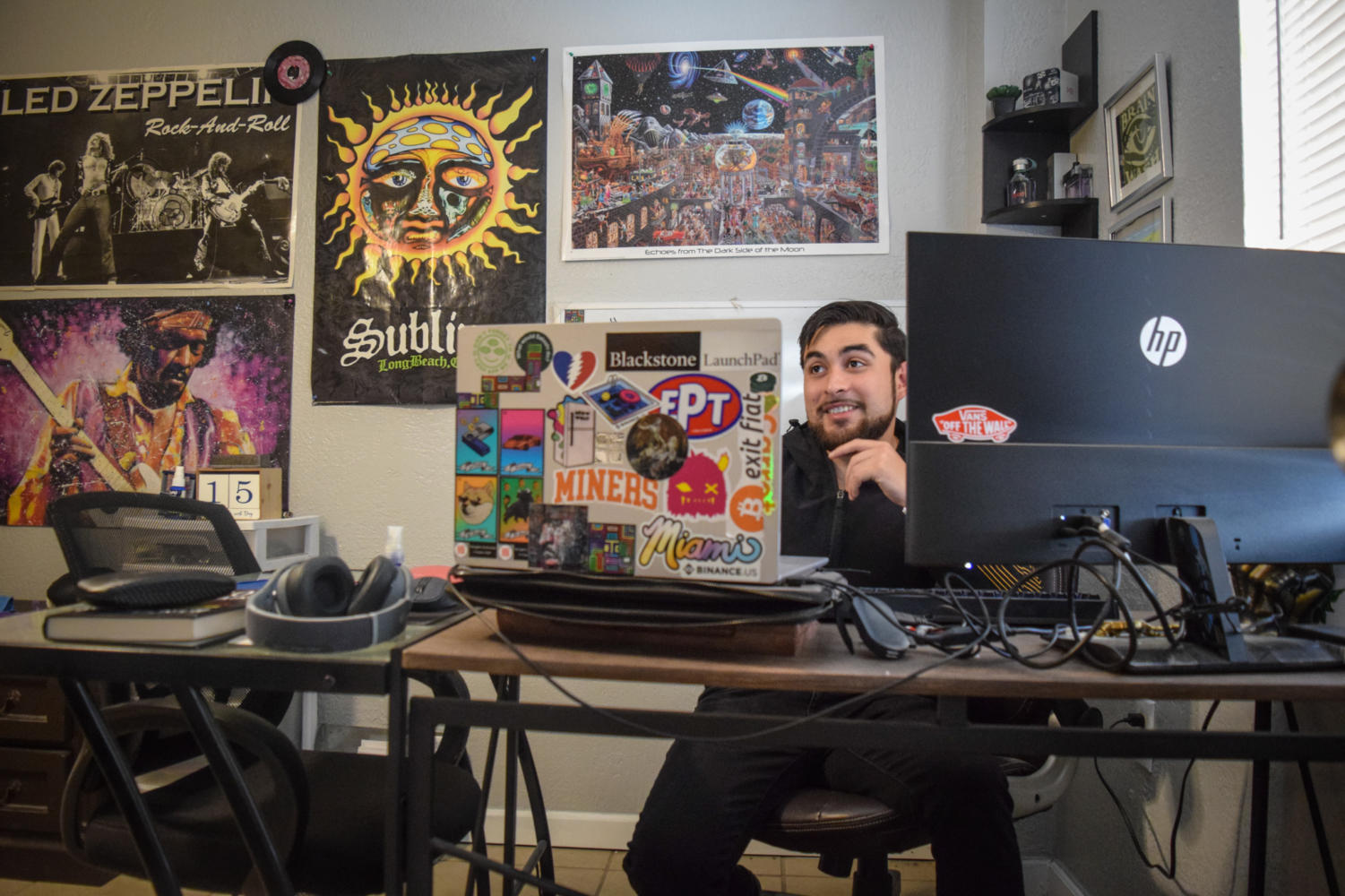 The pursuit of cryptocurrency on the border

In the beginning of the global pandemic, Gámez dived full force into the vast world of internet currency, inspired by his curiosity for the technology running Bitcoin.

In between gray rock walls and beneath the sweat-inducing glare of the noon El Paso sun in 2020, David Gámez, a student at the University of Texas at El Paso (UTEP) and leader of UTEP’s Blockchain Miner’s Club, trekked down a concrete pathway to a desert-toned door. He had been knocking on every door in an East El Paso neighborhood, a requirement of his day job prior to the era of the COVID-19 pandemic.

At the time, Gámez worked for a local solar panel company as a sales representative selling solar panels. He would go knocking door to door to earn, at some times, $6,000 from commission.

“Those deals… they can treat you really nice or you can go a while without making (anything),” Gámez said.

He was good for a while, he said. That is until the COVID-19 pandemic reached El Paso.

At the time, Gámez had been living on his own, in his own apartment with a former significant other who, at the time, had also lost her job.

Nearly 50,000 El Pasoans lost their jobs just a month after the first cases of COVID-19 appeared in the borderland, according to data from the Bureau of Labor Statistics (BLS).

Gámez was among those whose job had been lost to the pandemic.

“I had to find something to do because I wasn’t (getting) any income,” Gámez said.

It was his third year at the University of Texas at El Paso, studying computer science, but, three years in, he found himself, unwillingly, without a job and at the time, a tuition to pay for, and a pandemic that felt as if it had no end. Gámez felt lost.

Then he started looking into cryptocurrency – more specifically blockchain technology.

Blockchain technology, described as the “heart” of crypto-coins by the Harvard Business Review (HBR) is a essentially a ledger:

“In which contracts are embedded in digital code and stored in transparent, shared databases, where they are protected from deletion, tampering, and revision. In this world, every agreement, every process, every task and every payment would have a digital record and signature that could be identified, validated, stored and shared. Intermediaries like lawyers, brokers and bankers might no longer be necessary. Individuals, organizations, machines and algorithms would freely transact and interact with one another with little friction. This is the immense potential of blockchain,” according to Harvard Business Review

Gámez was still in high school when he first heard about cryptocurrency. It was not until 2020 that Gámez pulled the trigger, diving full force into the vast world of internet currency, inspired by his curiosity for the technology that runs Bitcoin.

Bitcoin, the first and most well-known form of cryptocurrency (and Gámez’s first coin), was first specified and explained in a proof of concept published in 2009 by Satoshi Nakamoto, a pseudonym for a person whose identity remains unknown.

Nakamoto’s concept, the concept behind the popularity of the crypto-coin: “a purely peer-to-peer version of electronic cash” which would allow online payments to be sent directly from one party to another without going through a financial institution.

Cryptocurrency, the name of the now much larger world of internet-money, had been idealized far before in 1998 by Wei Dai, a member of the Cypherphunk mailing list, from the era of Web 1, a.k.a. the world wide web of the 1990s-2000s.

Dai described B-money, a crypto-coin that one might liken to Bitcoin, which would be, “an untraceable network, where senders and receivers are identified only by digital pseudonyms (i.e. public keys) and every messages is signed by its sender and encrypted to its receiver.”

Adapting and re-applying that concept, Bitcoin, according to its website, would create a network sharing a public ledger that contained every transaction ever processed.

The goal: solving the issue of fraud,  “double-spending” or in simple terms, a counterfeiting problem, and of course, the intermediate party.

Though Bitcoin had first appeared on Jan. 3, 2009, it was not until May 22, 2010 when the first Bitcoin purchase ever was made by a Florida man, Laslo Hayecz, who spent 10,000 Bitcoin on two Papa John’s pizzas.

From that point forward, Bitcoin’s value had increased significantly, its highest value reaching around $65,000 in 2021.

Gámez bought his first Bitcoin around March 14, 2020, just 10 months before the value of Bitcoin increased to nearly $40,000. At the time, the coin he was looking to buy was around $5,000, according to Coindesk which has been indexing the value of the coin since 2014.

“Luckily I had a little bit of savings by that point. And when the pandemic hit, all the markets dropped insane,” Gámez said. “So I put it all in there and for the next three months,  it started going up and up and up.”

“It allowed me to survive those three months without a job or anything. Like, it literally put food on my table, you know,” Gámez said.

Ultimately, he said it was an investment – a good one.

Through purchasing Bitcoin, seeing the return in value, feeling the excitement of an ever-increasing future-forward, electronic currency, Gámez felt exhilarated. But, he could not do it on his own. He looked to someone special in his life, a person that ended up becoming key in Gamez’s journey traversing in virtual currency waters: His mother.

“I was more in the mindset of like, let’s conserve and let’s keep stacking up. So I would throw in as much as I could and you know,” Gámez said. “At that point, it was like 100% return. And I started talking to my mom, and I convinced her to loan me some money, you know?”

His mother was an esthetician at the time. Though her business took a pause amidst COVID-19 shutdowns, she returned to face-to-face services almost immediately as they were lifted.

“By that point, we had a really good amount and my mom was like, you need to sell,” Gámez said.

So he did and with the return, he bought a car.

Since 2020, Gámez has ventured into buying other coins besides Bitcoin.  He said that stepping into the world of cryptocurrency was not a quick decision.

Additionally, an extensive frequently asked questions (FAQ) page lists questions from who created the coin, who uses it, to why it is trusted and also a list of the advantages and disadvantages.

According to the site, some of the advantages include, no bank holidays, no borders, no bureaucracy…allowing its users to be in full control of their money.

And the disadvantages: volatile lows and highs in value, still not widely accepted, and ongoing development.

“I think for a lot of our own students and their families, irrespective of whether they come from the other side of the border or on the U.S. side – I think it’s very risky (for them),” said UTEP Professor of Finance and Associate Dean for Faculty, Research and Graduate Programs Doctor Erik Devos.

El Paso’s average income was $48,292, according to experiential data from the 2020 U.S. Census Bureau’s American Community Survey’s 5-year-estimate, which collected responses through internet, mail, telephone from only some segments of the population due to COVID-19.

“If you don’t have a lot of disposable wealth, and it’s tied up in something like (cryptocurrency) – for all you know, your whole wealth might be half tomorrow,” Devos said.

Devos is talking about something called volatility, the quality of cryptocurrency that describes the sudden change in value it can sometimes experience.

“It’s hard for a lot of people to kind of come to grips with how these values are sort of created,” Devos said.

That is because the value of the crypto-coin is not intrinsic, Devos said, like a piece of gold that one might sell in exchange for money or the dollar bill and quarters one might spend for a bag of Takis at school.

“Somehow you end up with a price, right? There’s price supply and demand for something. But what’s the actual underlying value of it? ” Devos said. “I think conceptually, it’s kind of hard to figure out what is the actual value.”

The non-intrinsic nature of it is just the first hurdle a new crypto owner might run into, as Bitcoin’s own website states: “It s still not widely accepted in a large amount of stores. So actually spending the money is a whole other process.”

You first have to start something called a “wallet,” defined by Coinbase, an app created for the buying and selling of cryptocurrencies as a way to “store your private keys, keeping your crypto safe and accessible. They also allow you to send, receive and spend cryptocurrencies like Bitcoin and Ethereum.”

Since 2009, Bitcoin has increased significantly in value since its creation, increased public-awareness of cryptocurrency, led to the creation of other coins like Ethereum or Binance, fueled discussions about the coin’s impact on the environment, and has opened the doors for new forms of cryptocurrencies to exist like the Non-Fungible Token (NFT).

The NFT, which works under the same premise of person-to-person transactions, is different from the traditional crypto-coin.

“In NFTs you just have to write something, a picture or GIF, something. So at least there you know what you’re getting,” Devos said.

Yet, it seems, the same question still stands.

“(NFT art) is not unlike, say, an actual physical painting. Is a Van Gogh really worth 80 million to someone?” Devos said.

Editors Note: As of May 2022, cryptocurrency like Bitcoin had seen a 50% drop since November 2021, where, according to Coindesk, at its peak, valued nearly $68k.

The drop did not worry Gámez who accredited the “crash” to the recession and big investors like Tesla selling off assets and causing dramatic movements in the market.

“These times bring uncertainty and despair and typically those are good times to buy,” Gámez said. “The best thing to do is to always diversify.”