Halloween, but make it year-round 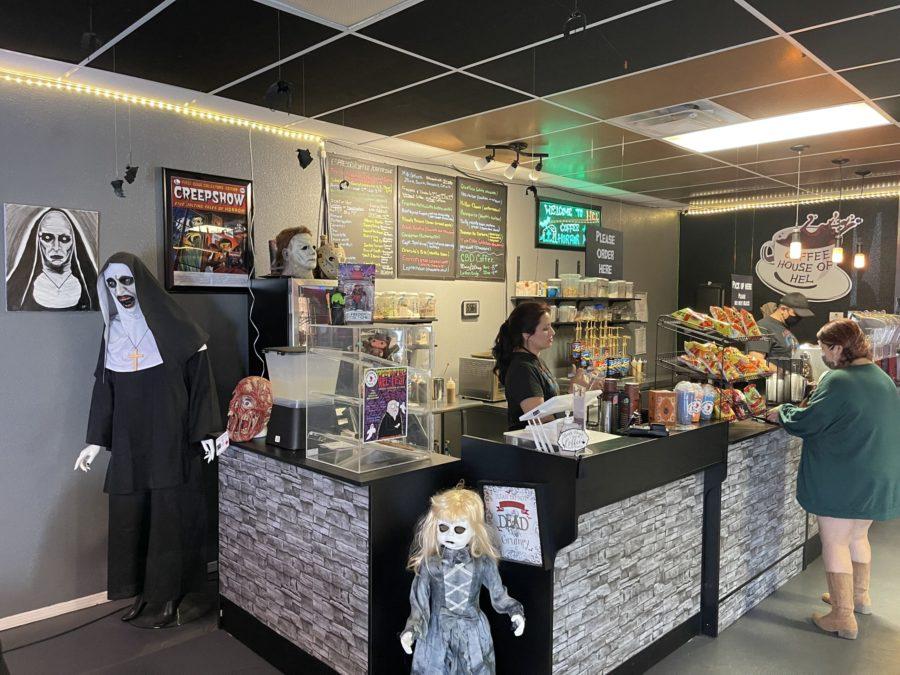 With the many coffee shops that El Paso has to offer, the Coffee House of Hel located at 2200 Lee Trevino Drive #B3B, has a unique theme that makes it stand out in the El Paso coffee-shop scene. It is a Halloween themed coffee shop that stays open for business all year long.

The Coffee House of Hel opened on June 5, 2020, by El Paso couple Helen and Robert Hinojos. Currently, they are the only two working at the coffee house, which is their only source of income.

“It’s just myself and my husband that work here,” Hinojos said.

They are not actively looking to hire any employees but may consider it if the shop gets busier.

“Eventually we would like to hire but we are not there yet,” Hinojos said.

When they first planned to open the Coffee House of Hel, Hinojos and her husband drove around the city looking for vacant buildings. Choosing the Lee Trevino location has worked well for them, the couple said, because it is across from Hanks High School.

“We’ve seen a lot of kids when they go to lunch,” Hinojos said. “They travel in packs.”

The local coffee shop was almost named Halloween 365, but Hinojos and her husband decided on Coffee House of Hel, with only one ‘L’, a play on Helen Hinojos name. (By the way, it’s trademarked.)

“There’s a big horror community,” Hinojos said. “Just like us, people think it should be all year round.”

So Hinojos and her husband made it happen. The pair said they are huge horror fans and originally wanted to bring the concept of horror and ice cream together, after the film “Burying the Ex.”

“I know people love ice cream year-round, but when it gets really cold people may not want it,” Helen Hinojos said.

“With coffee, we can do iced, hot, everything,” Helen Hinojos said.

“It’s busy all year,” Hinojos said. “I think the slowest time for us was when the judge ordered the shutdown.”

COVID-19 caused business to be slow for the Coffee House of Hel at the end of October, as well as November and December 2020. Due to dine-in not being allowed, that was a struggle for this coffee shop.

“People wanted to sit down and drink their drinks, but we couldn’t do that,” Hinojos said. “It was very hard for us to get people to come in.”

The Coffee House of Hel is requiring guests to wear masks, only when it is mandated for El Paso.

The Coffee House of Hel does not compete with other local coffee shops. Being a Halloween themed coffee shop is what sets them apart from the rest.

“We’re not really trying to compete because we are different,” Hinojos said. “People come in because of how this is decorated.”

Hinojos shared that being a Halloween themed coffee shop helped business, rather than hurting it and one day, they said, they hope to open more stores throughout El Paso.

“We pray every day that we’ll be able to,” Hinojos said. “Maybe west side or out of town.”

Business at the Coffee House of Hel has not slowed down, even when it is not the Halloween season.

Like many coffee shops, the Coffee House of Hel is a place where people come to study.

“Students come here and study. Teachers come and study. We have Wi-Fi, so they come in and study with their laptops,” Hinojos said. “Or they’ll watch a movie.”

Hinojos shared that it is “hard” coming up with the names and flavors of their drinks. All drinks are made by the Hinojos’, in which their recipes have changed “several times.”

“It’s all experimental,” Hinojos said. “Based on the look and the taste is how we name them.”

A few new items have been introduced to the menu that were not on it last year. Energy drinks, lemonades, and CBD coffee were added just a few months ago. In addition, they have added more teas and milkshakes.

Their most popular requests, however, are the “Bloody Valentine” milkshake which tastes like “chocolate covered strawberries,” and the “Exorcist” milkshake, with “green caramel apple with white chocolate.”

The Coffee House of Hel offers specials daily and sometimes weekly. They currently have a rewards program, in which consumers can become “VIP customers,” and receive points towards free drinks after so many visits.

All of the ingredients are bought by the Hinojos’, rather than being provided by a shipping company.

“It’s just us and that’s it,” Helen Hinojos said.

As for decorations—a few of the props and decorations are donated, but the rest are bought and made by the Hinojos’.

“A lot of the posters we actually brought from home,” Hinojos said. “This is pretty much what it looks like at home as well, very horror decorated.”

Though the horror concept does not change throughout the year, the coffee shop will change out its props to go with different months in the year.

“For Christmas, we change it to “The Nightmare Before Christmas” or “Krampus” which is still horror but a little bit different,” Hinojos said. “Same thing for Valentine’s Day, it was “My Bloody Valentine. Or Saint Patrick’s Day, we had the “Leprechaun.”

This story is a part of series of posts that were re-uploaded after being deleted.