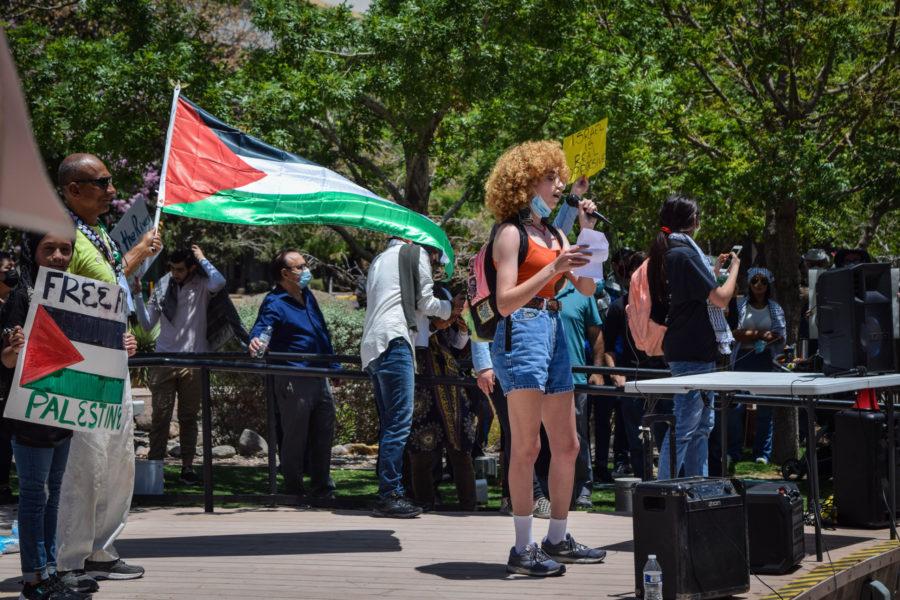 EL PASO, Texas- Hundreds of El Pasoans gathered downtown for a peaceful protest that advocated for the rights of Palestinian people.

A caravan began around 11:00 a.m. as protesters traveled on I-10 with their vehicles dressed in black, white, green and red and lettering on their windows that read, “Free Palestine.”

Supporters of the “Free Palestine” movement congregated in the middle of San Jacinto Plaza, shouting chants and holding signs that called for an end to the violence against Palestinians.

Protester, 57-year-old Shahnaz Habib, compared the violence against Palestinians as an unequal fight against prisoners. According to Habib, Palestinians are fighting without proper equipment and have an unequal chance of survival.

The territorial dispute between Israel and Palestine has been an ongoing fight, dating back to the end of the 19th century.

For around 73 years, the dispute over land, currently identified as Israel, has led to the oppression of the people in Palestine, according to protesters. Palestinians have been fighting to regain their ancestral land and as a result of recent evictions forced by Israelis in addition to the numerous Palestinian deaths, protesting around the world has broken out, making its way to El Paso.

After 11 days of continuous airstrikes to the Gaza strip, which resulted in the killing of 248 Palestinians, including the death of 66 children, according to a The New York Times article a cease fire was declared on the morning of Friday, May 21, a day before the protest held downtown.

In Israel, rocket attacks from the militant group, Hamas, killed 12 people with two of them being children.

A group of people protest as they carry flags and signs in support of Palestine at San Jacinto Plaza in El Paso, TX., on Saturday, May 22, 2021. (Juan Pablo De Anda De Alva)

Regardless of the cease-fire, protesters emphasized that the fight is still not over and peace and equality have yet to surround the people of Palestine.

Speakers of the event stood before the hundreds of people who attended and shared poetry and preached the importance of spreading awareness of the persecution Palestinians face on a day-to-day basis.

One of the speakers was 17-year-old Abigail Frierson, a student at Coronado high school.

Brochures that were passed out to protestors stated that Zionism has been a “racist, colonial ideology backed by imperial powers to supervise the Middle East.”

Organizers for EP for Palestine are going to start reading sessions, activities and hope to hold more protests in the future.